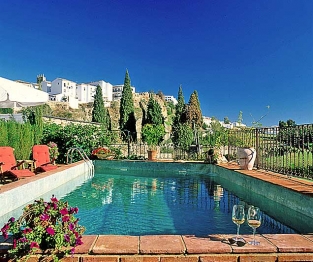 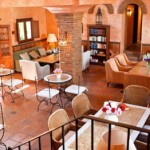 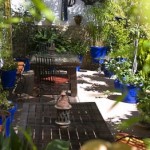 Alavera de Los Baños is a small charming hotel situated in a unique spot. Our house is located in one of the ancient areas of Ronda, at the original entrance.

Just a short 40-minute drive from the Costa del Sol lies the town of Ronda, also known as Ciudad del Tajo or Ciudad Soñada, that is, City of the Cliff or City of Dreams. Ronda enjoys an incomparable location, situated as it is on the edges of a 100-metre tall abyss. It’s the gorge of the river Guadalevín that splits the town into the modern part and the old city, where we come across many a historic monument such as the Arab baths, and a maze of narrow, cobbled alleys. The modern part of the town, on the other hand, is home to other appealing sites such as the Alameda del Tajo (or the Cliff Park), with its most renowned balcony, nicknamed balcony of surprise, or the historical Real Maestranza de Caballería (Royal School of Cavalry), in charge of Ronda’s magnificent bullring, whose 66-metre diameter surrounded by two stone rings makes it the largest worldwide.

The Puente Nuevo (New Bridge), over the river Guadalevín, bridges the gap between both parts of the city

What to see / What to do

There are countless tourists who travel to the south of Spain to visit beautiful cities like Seville, Cordoba or Granada, and who wouldn’t dare miss the chance of visiting Ronda. Ronda’s Puente Nuevo has taken the 9th place on TripAdvisor within the category “what to do in Andalusia”.Among its main monuments and most visited sites in Ronda, one can find the following: Puente Nuevo, the Bullring, the Alameda del Tajo (the Cliff Park), the Arab baths, the Murallas (the City Walls) and the Almocábar gate, the Carmen City Walls, Mondragón Palace, the Iglesia Mayor (Main Church)…